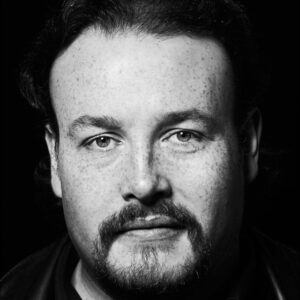 Russel D McLean’s debut novel, The Good Son (Five Leaves Crime), was published in 2008, and shortlisted for “Best First Novel” by the Private Eye Writers of America on 2010.

Since then he has written several more crime novels, including the darkly comic Ed’s Dead (Contraband), which was praised by Martina Cole as “a really authentic and remarkable read! I loved it!”

A former bookseller, Russel is now a freelance author, editor, and teacher. He has worked for publishers of various sizes as a developmental editor, including work on one book that was shortlisted for the McIlvanney Prize for best Scottish Crime Fiction at the Bloody Scotland Festival. He has also run masterclasses in fiction writing for festivals, universities and creative writing groups, as well as advising MLitt students on the fiction element of their dissertations for the University of Dundee’s crime writing and forensics course. For two years, he wrote a crime fiction review column in the Scottish Sunday Herald, and has interviewed authors for several newspapers and magazines.

Although Russel’s primary concern has been noir and thriller fiction, he has also worked across a variety of genres as an editor including horror and SFF. You can find more about Russel and his work at his website, www.russeldmcleanbooks.com  and find him on Twitter here: @RusseldMclean

“I am really pleased with the level of detail. I know it’s going to be useful in improving my work and I have already begun implementing his ideas.”

"Russel's incredible insights, suggestions and motivational approach was superb. His mission was to take the novel to the next level and, boy, has he done that! I would thoroughly recommend his services to anyone who is serious about their crime writing."

“I've read and reread Russel’s report repeatedly over the past few weeks, absorbing his suggestions and advice – it's easily the best piece of criticism I've ever had and I'm enormously grateful for it.”

“Russel’s help and detailed assessment has helped me immensely in sharpening the plot and removing fault-lines.”

“Russel’s efforts have been worthwhile and much appreciated. He not only highlighted flaws and how to fix them but illustrated these with working examples from my text. There’s more drama, punchier dialogue, far less telling and elimination of superfluous text. My manuscript is a lot tighter as a result of Russel’s critique.”

“Russel’s feedback was detailed but also concise, highlighting areas of my work that needed focus and greater attention to detail but also friendly and encouraging. The story’s now leaner, dialogue much punchier and the whole story just works so much better.”

WHY WE LOVE RUSSEL

Russel is boundlessly positive and encouraging, and is a master at helping writers write the best book they can. Having worked with the likes of Amazon and similarly huge publishing houses, Russel knows what editors (and readers) are looking for – and how to incorporate this authentically into your edits. By incorporating his teaching methods into his detailed critiques, Russel not only highlights areas of improvement, but demonstrates how to fix them using examples from your text.  He articulates things clearly, succinctly and in a friendly manner that is bespoke to you.

WHAT RUSSEL SAYS ABOUT EDITING

I came to editing in a very roundabout way, when a publisher I knew asked if I had any experience in editing and whether I would be willing to work with one of their authors on a very specific project. After that first experience, I realised how much I enjoyed working with authors and helping them to see their books from an outside experience. As an editor, I often tell clients my job is to “ask the daft questions before the readers do”, especially because it’s very easy to forget that readers don’t have access to all the information we have about our story and characters, and can only act upon the clues in the text.

Honesty and empathy are important to me. I try to understand what the author wants to achieve, and then direct them towards techniques and tricks that will help them achieve this. Sometimes this will mean rewriting wholesale. I don’t want to pretend writing is easy, but the joy comes in learning and considering new ideas.

What Russel works on

DC Ernie Bright is dead. A good cop gone bad? Not everyone believes that one of Tayside Constabulary’s longest serving detectives was leading a double life. One of those looking to vindicate the dead copper is Bright’s protege, private investigator J McNee, who has his own reasons for trying to prove Bright’s innocence. But as the evidence piles up and McNee makes enemies on both sides of the law, he finds that justice and the law are not always the same, and that good people can make bad decisions. Dark, violent and psychologically gripping, the third in the critically acclaimed J McNee series will change the Dundee detective’s world forever.

Meet Jen, who works in a bookshop and likes the odd glass of Prosecco…oh, and she’s about to be branded The Most Dangerous Woman in Scotland. Jen Carter is a failed writer with a rubbish boyfriend, Ed. That is, until she accidentally kills him one night. Now that Ed s dead, she has to decide what to do with his body, his drugs and a big pile of cash. And, more pressingly, how to escape the hitman who s been sent to recover Ed s stash. Soon Jen s on the run from criminals, corrupt police officers and the prying eyes of the media. Who can she trust? And how can she convince them that the trail of corpses left in her wake are just accidental deaths? A modern noir that proves, once and for all, the female of the species really is more deadly than the male.

Mothers of the Disappeared

Suspended from the Association of British Investigators and facing an enquiry into his alleged misconduct over four years previously, J McNee’s career hangs in the balance. The last thing he needs is new business. But when the mother of a murdered child asks him to re-open a case he helped close during his time in the police, McNee can’t refuse. Is the wrong man serving a life sentence for a series of brutal murders? And, if so, why did he admit his guilt before the court? As McNee searches for answers, he finds himself forced to make a terrifying moral choice: one that will change his life forever.

Mary Furst is missing. The teenager, god-daughter of local hard man David Burns, was a good girl with no history of trouble. But when PI J McNee is reluctantly drawn in to the investigation surrounding her disappearance, he soon discovers that the worst lies people tell are the ones to they intend to protect themselves, and that old secrets have a way of impacting on the present.The second J McNee mystery “begins to open up McNee’s psychological baggage” (Library Journal, starred review), developing and adding new layers to the detective readers first met in “The Good Son”.”…an intense, taut crime story with a caustic PI. Not to be missed by fans of straight-up hardboiled noir.” RTBook Reviews”…snappily written heart-thumper.”