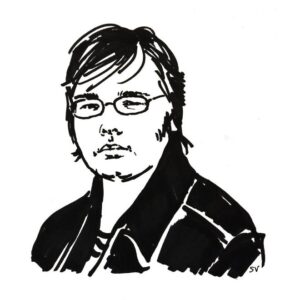 Described by acclaimed short story writer and novelist Dan Rhodes as ‘one of my favourites’, Richard is the author of Hound Dog (Jonathan Cape), the story of a depraved Elvis impersonator on the run.

His art survey London in the Company of Painters was published by Laurence King in 2017 and was listed by Martin Gayford as one of the art books of the year in The Spectator, and a London book of the year in the Evening Standard. A comic strip horror story, ‘The Fixer’, appeared in David Lloyd’s online comics anthology Aces Weekly in 2019. He has written articles for the Guardian website and the art periodicals Frieze and Elephant, and has been a literary consultant since 2007.

"It’s exactly the sort of critique I needed and it will give me plenty to think and work on.“

"Thank you for such a thoughtful, thorough and honest report. It was exactly what I needed. I loved the honesty and I am also grateful for the diligence with which Richard approached the review; I could tell that he had really thought about it and read what I had sent thoroughly. I am very appreciative.”

“I wanted to let you know that it is the most useful feedback I’ve ever had. I agree with you on all of your main points, (…). Your insight on my wandering Point Of View is incredibly valuable, and will change the way I write. Thanks so much. I hope I can work with you again at some point.“

"Thank you so much for this - all of it is hugely insightful and brilliant. Amazing. I actually feel that the report goes beyond the call of duty as I can feel the fondness for writing with which the editing has been done. So that is huge testament to you."

WHY WE LOVE RICHARD

Richard has a great eye for satire and has a wonderfully clear and direct approach to writing reports. We find his reports honest, contemplative and diligent; he will digest each line of your manuscript with the seriousness needed to pinpoint areas of improvement. We love his openminded approach to reading manuscripts, no matter the subject matter, he will always strive to improve your title in a way that chimes with your own aims and ideas. As one author wrote you ‘can feel the fondness for writing with which the editing is been done’.

WHAT RICHARD SAYS ABOUT EDITING

It is very rare for me to read a manuscript and not find some good ideas, interesting characters or astute observations in there, even if it is very rough around the edges as a whole. What excites me is concentrating on the parts that are distinct and unusual and showing the author how they can be developed, while at the same time raising the rest of the manuscript to a standard that matches them. My method is simply to read what is in front of me, say what I like about it and what I don’t, and imagine what a more successful version of it would be like. I also have an eye for detail and can spot inconsistencies and inaccuracies well. I particularly enjoy stories with a strong main character where the focus in on the world they inhabit, rather simply than following an overly mechanical plot. Having said that, I find a truly unexpected plot twist very appealing!

What Richard works on

Short story collection in which the fantastic, banal, unsettling and profound collide against each other.

London in the Company of Painters

Art survey of paintings of London over nearly five hundred years of history.

View all children's & young adult editors
New writing courses now available
Learn the fundamentals of writing and publishing in your own time with our comprehensive video courses. As a member, you have unlimited access to all our video courses.