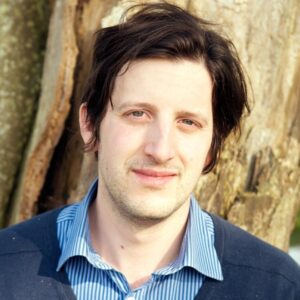 Philip Womack was born in Sussex, and educated at Lancing and Oriel College, Oxford, where he read Classics and English. After graduating, he worked at Literary Review for four years, before becoming freelance in 2008 on publication of his first novel, The Other Book. Six novels for children followed, including The Liberators, The Double Axe and The Arrow of Apollo, and his first non-fiction work for adults, How to Teach Classics to Your Dog, was published in October 2020.

He teaches Creative Writing to BA and MA students at London University, and has been a literary critic for nearly twenty years, as well as a freelance journalist for a variety of national newspapers and magazines, writing on topics such as education and literature, and even an article on pyjamas for Tatler magazine. He is currently on the Management Committee of the Society of Authors and a Contributing Editor to Literary Review.

“Your report played an invaluable role in helping me re-conceptualise this work.”

“Your report has given me much food for thought and something significant to work on. This was exactly what I was hoping for, so thank you for your thoughts.”

“Your assessment is really thorough and has given me plenty to work on – It will be a huge help to me in making this book the best I can make it.”

“Your report is far more than I expected or hoped for, and is exactly what I need to turn the book into something more exciting and marketable. I particularly appreciate your ideas for improvement, which I think are brilliant! This is the first time I’ve tried to write a book, and I don’t know anyone who writes or is even remotely linked to the world of publishing, so I’ve just had to hope that I’m heading in the right direction. This means an opinion from someone like you is incredibly valuable to me.”

"In receiving my report from Philip, he's given me work to do. Am I up to it? Yes. My goal is the finest work I can produce, with help. It's been a few weeks since I first read it. It marinated in my brain for a while. Now begins the next draft. Thank you Jericho Writers."

WHY WE LOVE PHILIP

We love reading Philip’s honest and well-informed reports – particularly those he does for children’s authors and sci-fi and fantasy writers. You’ll also find Philip as our lead tutor on our Ultimate Novel Writing Course.

WHAT PHILIP SAYS ABOUT EDITING

I have been an editor with Jericho for several years, and it’s great to feel that the advice and suggestions one makes help writers on towards their goals, at whatever stage of the writing process they are, whether you’re right at the beginning, or struggling with something in its final throes. Writing is a difficult business, and a friendly, informed, but honest critique can be just the thing someone needs to get going into the publishing world.

I bring intelligence, wide knowledge of the literary landscape, accuracy, experience and a range of literary and pedagogical knowledge to each project, and I hope to be as encouraging as possible, whilst also being alive to the realities of each project. I hope that each of the people that I critique will be able to recognise the key things that they need to do in order to make their work really stand out from the crowd.

What Philip works on

Dark forces are at work in the House of the Double Axe. Stephan, the thirteen-year-old son of King Minos of Crete, stumbles across a terrifying conspiracy. Is the Minotaur, a half man half bull who eats human flesh, real? Or is something even more dangerous threatening to engulf both the palace and the world? Stephan must race to save his family from a terrible fate and find out what really lurks inside the labyrinth…You think you know the story? Think again.

A story of knights and gods, a quest that takes its characters through wild and strange landscapes, a tale of courage and loyalty in the face of terrifying opponents, The King’s Revenge brings Philip Womack’s much lauded Darkening Path trilogy to a thrilling conclusion (though for those who haven’t read the preceding books, it’s a satisfying adventure in its own right). Reunited with their sister and brother, friends Simon and Flora face one final challenge in the world of the Broken King, but it’s their most difficult yet; fail, and everything in the kingdom will die. As they set off on their quest, there’s a wonderful sense of comradeship.  The world Womack creates rings with echoes of favourite myth and history, but is unique to his vision.  The writing is excellent, this is children’s fantasy of the highest order.

‘You are the chosen ones from the other land who will come to seek their siblings and with the hunting horn and the sunsword tear the king’s shadow and overthrow the Broken King.’ Simon and Flora have reached the land of the Broken King in search of their siblings. But here, nothing is quite what it seems. Who can Simon and Flora trust? What does Pike, their mysterious companion, stand to gain? As rumours of war and revolution swirl around them, and as the sinister Knight of the Swan dogs their every move, the pair must confront their terrifying final task. And if they can free their siblings, will they then be able to open the way between the worlds, and return home?

When Simon’s little sister is mysteriously snatched away to a dark other world, he is sent by a golden messenger on a dizzying quest to get her back. With him is Flora, whose brother has also vanished, and a strange boy who rescues them from a violent attack. To enter the land of the Broken King they must complete three tasks: Eat the Shadow. Steal the Sun. Break the Air. But how do they even begin? And what lies in wait for them, in the land of the Broken King?