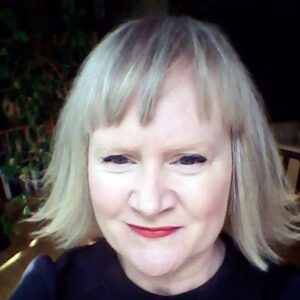 Lesley is the author of fiction and non-fiction as well as short stories and is a literary critic for The Herald.

Lesley McDowell is the author of two novels (The Picnic, 2007 and Unfashioned Creatures, 2013) and a work of non-fiction (Between the Sheets: The Literary Liaisons of Nine 20th Century Women Writers, 2010). She has a PhD from the University of Glasgow on the work of James Joyce, and for two years was Teaching/Research Fellow at the School of English, University of St Andrews.

After leaving academia, she carved out a new career for herself as a literary critic, reviewing and writing for such publications as The Guardian, The Times Literary Supplement, The Herald, The Scotsman, and The Independent. During that time, she won two Creative Scotland writing awards, and in 2014 was Writer-in-Residence at Gladstone’s Library. Her own work has been reviewed in The Independent, The Sunday Times, The Financial Times, The New York Times Review of Books, and she has been shortlisted for the Scottish Book of the Year.

She is currently signed to Ian Drury, literary agent at Sheil Land, London, and has completed her third novel, A Peck of Dust, about a Victorian woman accused of murder.

WHY WE LOVE LESLEY

Lesley is our go-to editor for anything historical or women’s fiction. Her knowledge in these markets and enthusiasm shines in every report she does.

WHAT LESLEY SAYS ABOUT EDITING

Having worked for twenty years as a literary critic and been solely concerned with the published, finished product, it’s a real delight to focus on the other end of novel writing – the stage where writers are finding out who they are and what kind of stories they want to tell, and helping them realise their goals. There are few things more exciting than reading a manuscript with real potential, and seeing through to recommendation to an agent publisher.

Because I did spend so much time professionally at the finished ‘end’, I have a good idea of what the market wants, and is prepared to feature in newspapers and magazines. I’d like to think I can see that finished product, which is important when you’re starting out – you want to be able to fix the small things, but you need an accurate vision of the final product, too.

My favourite topics are women-centred stories, preferably from the past. I like experimental work, too, but am equally happy with traditional novel forms. My favourite writers are Joyce Carol Oates, Shirley Jackson, and Marina Warner, but I also like crossover genres like literary crime, like Megan Abbott.

What Lesley works on

‘Monstrously good’ – Louise Welsh. A Fiction Hot Pick 2014 selection for The Literary Sofa. London, 1823. Mary Shelley’s real-life friend Isabella Baxter Booth is ‘disturbed in her reason’ – seeing ghosts and dependent on narcotics to escape a hellish life with an increasingly violent, deranged husband. Fearful of her own murderous impulses towards him, Isabella flees for her childhood home in Scotland, where she meets an ambitious young doctor, Alexander Balfour. He will stop at nothing to establish a reputation as a genius in the emerging science of psychiatry and he believes that Isabella could be the key to his greatness. But as his own torments threaten to overwhelm Alexander, is he really the best judge of which way madness lies?

One day in 1973, a woman mysteriously vanishes from a family picnic while on holiday in Toronto. The multilayered narrative of ‘The Picnic’ explores the effect this has on her daughter and granddaughter, who return home to Scotland without her.

Why did a gifted writer like Sylvia Plath stumble into a marriage that drove her to suicide? Why did Hilda Doolittle want to marry Ezra Pound when she was attracted to women? Why did Simone De Beauvoir pimp for Jean-Paul Satre? The list of the damages done in each of these sexual relationships between female writers and their male literary partners is long, but each relationship provokes the same question: would these women have become the writers they became without the experience of their own particular literary relationship?

Focusing on the diaries, letters, and journals of each woman, ‘Between the Sheets’ explores nine famous literary liaisons of the twentiety century. Lesley McDowell examines the extent to which each woman was prepared to put artistic ambition before personal happiness, and how dependent on their male writing partners these women felt themselves to be…

“Lesley McDowell gave me a brilliant in-depth editorial report. I fully appreciate the amount of time and thought she put into reading the manuscript, and the conciseness of her criticisms and suggested ways forward. Well worth the money! thank you for providing this service.”

“That sort of constructive criticism was exactly what I wanted (and is what can’t be obtained from well-meaning friends, who inevitably say how much they’ve enjoyed the read but don’t ick out any weaknesses).”

"Thanks again for this very useful and constructive feedback. I will definitely incorporate it into my next round of revisions."

“Your appraisal is very positive and has provided me with much food for thought as to how best to proceed.”

"I’m pretty much floored by your analysis. You’ve done me a great service. The report is clear, well organized, and brimming with insight. As I worked on the draft, I worried about some of the issues you raise. Just didn’t know how to fix them. You’ve given me a path toward a new draft."