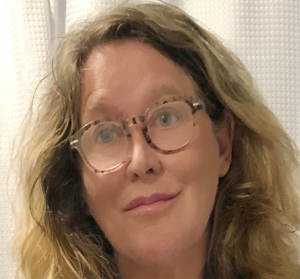 Kathie is a screenplay, fiction, and nonfiction editor with more than 20 years of experience working with first-time writers to Academy Award and Pulitzer Prize winners.

At DreamWorks SKG, Paramount Pictures, and Spelling Films, she developed scripts for highly-acclaimed writers and directors, including Horton Foote, Sydney Lumet, Roman Polanski, Stephen Spielberg, William Friedkin, Philip Noyce, and others. She has vast experience mentoring both beginning and seasoned screenwriters and authors through all stages of the writing process, from concept to final draft. A former film editor, Kathie studied English literature at Northwestern University and screenwriting at Columbia University.

Kathie’s own script, Loco Weda, was optioned by The Mount Company, and she is currently working on a novel and an oral history of homeless women called Women Outside. She lives on Bainbridge Island, a ferry ride away from Seattle, Washington.

WHY WE LOVE KATHIE

Kathie gives excellent insight into everything she works on, whether she’s using her screenwriting knowledge to help ramp up your screenplay, diving into your fantasy world, or using her sharp eye for detail to line-edit your manuscript.

WHAT KATHIE SAYS ABOUT EDITING

As an editor, my aim is always to understand what the writer is trying to accomplish, to examine what is working and what isn’t, and then to figure out what might be done to bring the story to life. Both intuitive and analytical, I am able to feel and see how the story might change, if need be, to imagine what it can become and how to get there.

I have great respect and compassion for every storyteller, and I am always aware that writing is a deeply personal endeavor and never an easy process, no matter the writer’s experience. When working together beyond a manuscript assessment, I both nurture and challenge the writers I work with, quickly building trust so we can work together in an honest way to strengthen the writing.

I enjoy all types of editing — manuscript assessment, developmental editing, line editing, copyediting, and proofreading — and I am happy to provide these services.

What Kathie works on

“Kathie Weaver’s intelligent, cogent, and emotionally sensitive ability to deconstruct screenplays and revise them for the good is quite amazing. She has helped many of our screenwriters as well as screenwriters for DreamWorks and others create that rarest of Hollywood jewels – a well-written script. Great structural sense, great character understanding, great ear for dialogue, and best of all, relentless in the pursuit of excellence.”

“Kathie gives the most thoughtful, detailed critiques I’ve ever had. She has a very unique, analytical mind and, more than any other person I’ve worked with, she gives deep background creative thought. I always have Kathie read my new work at least twice. Not only does she deal well with all the minutia, she is constantly searching for the core of the story — the breath of life in the tale you are trying to tell. She knows what is working, and what is not! Should you be fortunate enough to work with her, I am certain you will have similar kudos to tell.”

– Steve de Jarnatt, Author, screenwriter, and filmmaker, whose short story, “Rubiaux Rising,” which he worked on with Kathie, is included in The Best American Short Stories 2009