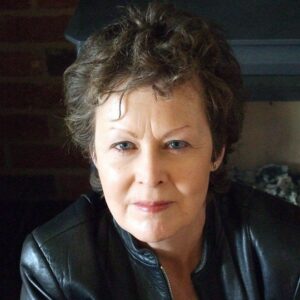 Her most recent novels are ‘Her Sister’s Secret’, ‘A Deadly Trade’ and ‘Final Target’, each published by Harper Collins. Eve also writes under the pseudonym G.S. Locke.

She has taken part in various literary events, including Crimefest, Bristol, and Harrogate Crime Writing Festival, and is no stranger to talking about her books on BBC radio. In November 2019, she appears in ‘Everything is Connected – George Eliot’s life,’ a new Arena documentary directed by artist Gillian Wearing on BBC 4. In the programme, Eve talks about why she chose to write with a male pseudonym, together with the challenges of writing in a genre that is traditionally associated with male writers.

She is represented by Broo Doherty at DHH Literary Agency, London. She has two crime fiction novels scheduled for release, under closely guarded pseudonym, with Orion in 2020 and 2021. You can visit her website at www.evseymour.co.uk

WHY WE LOVE EVE

Eagle-eyed Eve, a master of thrillers, will provide a deeply insightful and structured report that won’t leave any stone unturned.

WHAT EVE SAYS ABOUT EDITING

When I started writing I stumbled around for quite a while before I found an editorial consultancy that made the difference. Suddenly, and with a measure of embarrassment, I realised all the basic mistakes that I’d made and, more importantly, understood how to avoid them. It was like receiving a massive reality check. Shortly after working with an editor, I obtained agent representation. It was that simple. This only serves to illustrate that I genuinely recognise the importance of providing constructive criticism to new writers.

I’m also well aware that criticism, however well intentioned, can be difficult to accept. Some writers find it a painful and bruising process because they have invested so much of themselves in a story. It’s why I genuinely try to let a writer know, whatever point is made, I’m batting for them and that my job is to help each author make their story the best it can be. Depending on the author, I’m known for softening any critical pill with a little humour.

What Eve works on

A sudden disappearance… When Roz Outlaw’s partner Tom mysteriously vanishes, she knows his life is in danger. Tom has been distracted lately, afraid, as though he is being hunted…

A desperate search… With the police showing little interest Roz knows it falls to her to find Tom. But as Tom’s secrets are uncovered nothing can prepare Roz for the dark lies and twisted truths she finds. She thought she loved Tom, but quickly realises she has been living with a stranger – a man with murder in his past.

A house of evil… The key to unlocking Tom’s past lies in his childhood home – Vixenhead. A house of wickedness that keeps its secrets well hidden. Can Roz find Tom before it’s too late or will the evil within Vixenhead claim her too…

One moment of weakness can cost you everything…

Rogue assassin Josh Thane is an artist in murder. His next target is a British microbiologist suspected of creating devastating chemical weapons. Breaking into her house, he discovers someone has beaten him to it – she’s already dead. In a moment of weakness, he saves the life of her son. A single mistake that destroys everything he’s worked for and puts him and the boy in immediate danger…

When Molly Napier’s sister Scarlet is killed in a road accident the whole family are left in shock. The police are certain she purposely caused the crash that killed another, but what could have happened for sensible Scarlet to lose control at the wheel?

Determined to discover the truth, Molly begins to dig deeper into her sister’s life. With every question she uncovers yet more secrets, all connected to her own family’s past… One of them has something to hide.

And then Molly meets Rocco, a stranger with dark secrets of his own. Nothing could ever have prepared her for what comes next.

“When I needed a dose of realism, and that stern instruction to cut back on the violence, Eve was there for me! I couldn’t recommend her highly enough and I went back to her twice with One Last Prayer for the Rays.”

“Eve did really a great critique, with lots of suggestions and hints. It focused on points that I also found confusing without understanding the reason, and she helped me realize why. Thank you very much for everything.”

“I am amazed by your editorial talents – how you are able to grasp a story and analyse it to this degree is astonishing. I am excited about adapting as per your insightful suggestions and hope to produce a work that fits the thriller genre.”

"I was blown away by the thorough and professional report prepared by Eve... Eve's thoughtful and encouraging critique was worth every single penny."

"I benefited enormously from Eve's perspective and immensely appreciated the level of detail in her advice. Best of all, her notes helped me solve some major structural issues, and it’s a vastly better book for it."

"I’m so glad I found Jericho Writers. I had been looking for developmental editing on my manuscript and found the very, very best in Eve. She has been fantastic and so helpful. Thank you for finding her. What a gem!"

"Thank you to Eve for the impressive critique. She has clarified my mind greatly and I'm grateful for her advice. She's helped me to understand clearly what I need to do. I just hope I can achieve it!"

"Eve Seymour is everything I hoped for in an editor, methodically guiding me to improve my work. She is generous in her encouragement where things are working, clear and pointed where they aren’t. She gave me a very detailed set of comments critically taking me through the steps needed to improve my writing. I recommend her without any reservations. Thank you Eve!”

"Eve provided a terrifically useful report and I'd like to thank her hugely for such astute and useful feedback. This was exactly what I needed and was hoping for and I understand now how to rework my novel so that it will be immensely improved. Her comments and explanations will also ensure that the remainder of the book is written in the best way it can possibly be."

"You have no idea how much I truly appreciate the in-depth critique that you have shared. It is spot on and much needed."

"Thank you for your first-rate critique. You have helped me a lot and helped me also to see where my own instincts were correct."<br /> <br />

"I was blown away by the thorough and professional report prepared by Eve... Eve's thoughtful and encouraging critique was worth every single penny."

'I did first and foremost want to thank you for the level of detail and the sheer thoroughness of the report. I appreciate the huge amount of work that has gone into the report, it has well and truly exceeded my expectations. This level of honest, direct feedback is exactly what I was after. I am committed to improving my writing and ultimately, hopefully getting published, and what you have provided me with is an incredibly valuable tool to help on the road to this goal. ;